The British Lions are heading to South Africa in 2021 and you can experience it with Events Travel!

We are busy working on our Packages and Tours which will be available soon. In the meantime, please sign up for Priority Access, this will ensure you receive access to packages including tickets, hospitality and travel services as soon as they’re available.

After signing up, you will receive an email notification when packages are released and access to early bird offers.

What do you get with an Official British Lions Tour of South Africa Package from Events Travel?

Learn about your travel experience

The British & Irish Lions Tour began in 1888 as a commercial venture touring to Australia and New Zealand with a 21-man squad. The squad, known then as the English National Team or ‘British Isles’, included players from England, Scotland and Wales, though the team was predominantly English. In 1891 the Western Province Union invited rugby bodies in Britain to tour South Africa, establishing the first test-match tour and the tour as we know it today. Throughout the early 1900’s, the popularity of the tour grew with matches drawing hundreds of thousands of fans. Now, the British Lions Tour is one of the biggest topics of discussion on the rugby calendar. The squad selection takes months and is hotly debated by news outlets and rugby fans around the world. Once the squad is selected, months of hard-work, training and strategy planning takes place before finally heading on tour.

The highly anticipated British & Irish Lions Tour takes place every four years, with the 2021 Lions Tour heading to South Africa. The British Lions will take on the best of South Africa’s local clubs and representative sides for five matches before ending with three Tests against the reigning World Champions — South Africa.

New Zealand’s Warren Gatland is set to coach the 2021 British Lions team for the third time, having lead the Lions to a dramatic series draw against New Zealand in 2017 and a 2-1 series win over Australia in 2013. It’s sure to be an epic display of rugby with the British Lions hungry to repeat their 1997 victory against the Springboks.

Rugby aside, South Africa is a unique and exciting country, rich in history, culture, food, wildlife and sun-soaked coasts. It’s a special destination with breathtaking scenery and plenty to experience. Must-sees include Kirstenbosch National Botanical Gardens, Cape of Good Hope, Table Mountain, and for the wine connoisseurs; Stellenbosch, La Motte, Boschendal and Meerendal are sure to keep you occupied!  This is your opportunity to visit some of the most iconic rugby grounds in the world and experience some of South Africa’s historic sights.

We look forward to welcoming you to South Africa in 2021!

Learn about British and Irish Lions Tour to South Africa 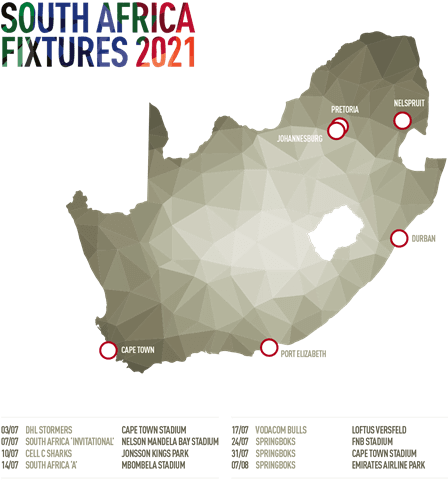 As a full service travel company, we have access to the best available services from suppliers across the globe. Let our Travel Experts put together a personalised travel experience for you.

Speak to a Travel Expert today.

Your Official Partner to the world’s biggest events, since 1993

For almost three decades, we’ve been helping fans experience the world’s biggest events including past British and Irish Lions Tours.

We work as an Official Travel Agent for many of the world’s biggest events to bring you official packages and exclusive experiences.

We partner directly with event organisations to provide 100% guaranteed tickets within our travel products.

When you call Events Travel, you speak directly to our Travel Experts. They’re waiting to get your British Lions Tour of South Africa 2021 journey started

STAY IN THE LOOP

Be the first to know when packages go on sale with priority access and early-bird offers.

Complete the following request form to receive a quote, availability and more information about travel to AO 2020.

We look forward to welcoming you to Melbourne!

Please wait for the page to re-direct after submitting.

It contains product releases, specials and travel info to your favourite events.

Ask a Question or Request a Quote

We look forward to answering any questions you may have or providing a quote to customise your travel experience.

If requesting a quote, the typical turnaround time is within 24 hours, excluding weekends and public holidays. Rest assured, we will work on getting an accurate quote back to you as quickly as possible.

Please wait for the page to re-direct after submitting.

It contains product releases, specials and travel info to your favourite events.